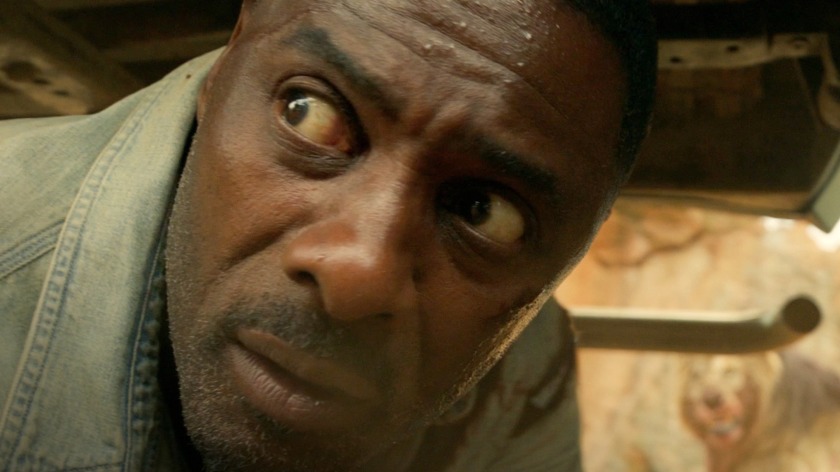 When you think of your favorite action stars, who comes to mind? Perhaps John Rambo himself, Sylvester Stallone. Or maybe even (if you forget the most recent sequels) the fierce and deadly Terminator, Arnold Schwarzenegger. Well, well, the filmmakers behind the 2022 “slam hit” Beast would have you think otherwise.

Idris Elba leads, and the actor’s strange connection with cat roles continues. First, he voiced the tiger Shere Khan in the live-action Jungle Book remake. He played villain Macavity, in the film adaptation of the Broadway musical Cats, and now he fights for his family against ‘King of the Jungle’ gone rogue in Beast.

As I work at a movie theater, when I initially put up the poster for the film, I couldn’t help but wonder, why does this movie exist? That was a question I pondered with my co-workers for some time, with none of us coming up with a clear and distinct answer. Now, in the back of my mind, it was clear there was only one way to find a resolution. With that being said, I can proudly write, that before I saw Top Gun: Maverick, Thor: Love and Thunder, or Jurassic World: Dominion, I had the great pleasure of experiencing Beast.

So, anyway, the movie’s not very good. But I loved it. There’s this one part where Idris Elba is standing on top of a car, with a rifle that has a scope, looking for a tower, and he’s looking in the direction of the said tower and does not see it. It was hilarious. A great segue into the just, awful screenplay. Early in the film, a side character is tracking the lion into a swamp, to which he finds a crocodile instead. You would think they’re setting this up for later, as there is a sequence with Idris Elba walking chest-deep in the swamp, but they just forget about it.

Another element that not many will pick up on at first (as you will most likely already be asleep) is that early in the film we learn Idris Elba lives in New York City. This is relevant because, going back to the crocodile scene, I was really hoping he’d take one home at the end of the movie and then this could secretly be a prequel to the live-action Lyle Lyle Crocodile film coming out in October. This does not happen.

A weird trend that occurs more than once is seemingly every time someone is told to stay in one spot, without hesitation they immediately leave. Oh, and when they leave they either don’t get to where they were going or don’t get the item they were trying to get.

Okay and then like the craziest thing ever happens, the lion has more motivation and character development in the movie than anyone else. It’s just so funny to think about how a whole bunch of people sat in a room and said, “But why does the lion want to eat people?” MY GUY, IT IS A LION, IS THAT NOT ENOUGH? Apparently not, and for that, I am grateful as it makes for an overall good laugh.

From the looks of the trailer, you would think Beast’s only competition would be Jaws. After watching the movie, I would say its real competition would be something more like M. Night Shyamalan’s The Happening. It’s not very well-made or thought out, but it has very high entertainment value.

Like I said earlier, I loved my time with Beast, and will be purchasing the most expensive version of the movie when it releases physically. The main takeaway from watching the film became evident near the end, Idris Elba may not like cats anymore, but he sure loves money.