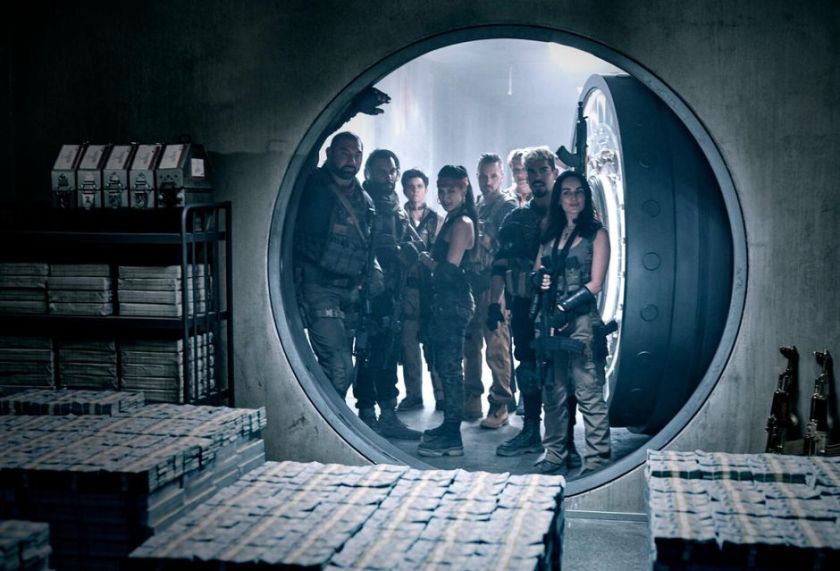 If you were to compare Zack Snyder to George Lucas, then this is his Star Wars Episode II: Attack of the Clones.

Army of the Dead was released on Netflix in 2021, and was directed by Zack Snyder. The film stars Dave Bautista as Scott Ward, Ana de la Reguera as Maria Cruz, and Hiroyuki Sanada as Bly Tanaka. After a zombie outbreak in Las Vegas, Scott Ward is offered 50 million dollars, to steal from a casino in the now walled off city.

The massive cast all work off each other very well, each with their own unique trait and personality. This can be seen best with the chemistry between Omari Hardwick’s character, Vanderohe, and Matthias Schweighöfer’s character, Dieter. Bautista shines here, doing well in both action scenes, as well as small character moments with one exception. A great example of this is can be found near the beginning, when he reflects on his past with the zombie outbreak, as he decides whether or not to take the job. Another stand out is Tig Notaro as helicopter pilot, Marianne Peters. While not much time is given to flesh out her character, she acts as a great comedic relief.

The worst side of the acting comes from Ella Purnell as Kate Ward. Every time she’s on screen you will most likely consider turning the movie off and, unfortunately, she’s in the movie a lot. Never once will you root for this character, wishing she was killed off soon after her introduction. She is the perfect example of how multiple times characters make stupid choices for no other reason than the script says so.

The script is filled with interesting mythos surrounding the zombies, dedicating entire scenes to seeing how this take on the formula differs from the norm, by having these zombies be intelligent, organized, and fast moving. It makes for some really cool set pieces near the end. It’s biggest problem in this regard, is that other than small moments, the script never ‘goes all the way,’ with its ideas.

The dialogue, for the most part, is pretty awful. The worst parts are when it slows down and tries to give characters emotional moments that do nothing in the film’s favor. The worst example of this is a moment between Bautista and Purell while trying to turn on a generator, in a failed attempt at a father and daughter bonding moment.

There are simply too many plot holes, and head scratching scenes found in the script that will take you out of any fun moments. Although, the moments that are fun (ie: every action scene in the film) almost balance out this issue. For example, there is a zombie tiger in this film, every part with is it super cool.

Also, this doesn’t really affect my final grade but, in regard to the story, that being a group of people going into contained area that’s about to be destroyed, if Jurassic World: Fallen Kingdom had been written similar to this, it would have made for a way better film. Think about it, instead of us only seeing how they captured a single dinosaur, in a 5 minute scene, we spend time (the entire movie) with different groups on the island seeing how they each have to capture the dinosaur they’re assigned in fun and unique ways. Just something I thought of while watching the movie, but, I digress.

The directing and cinematography are awesome, and add a lot of defining attributes that make this film stand out. All the action is well shot, and heart pounding. There were some interesting decisions made in this regard, for example, having characters walk away from the camera, without pulling focus on the actor.

It’s certainly not the worst film of the year, but for every moment Army of the Dead succeeds, there are just as many moments that bring it down. if all you care about is zombie action, you’ll be happy. If you want a compelling story, consider taking your casino chips to another table.